Solidarity instead of police violence! 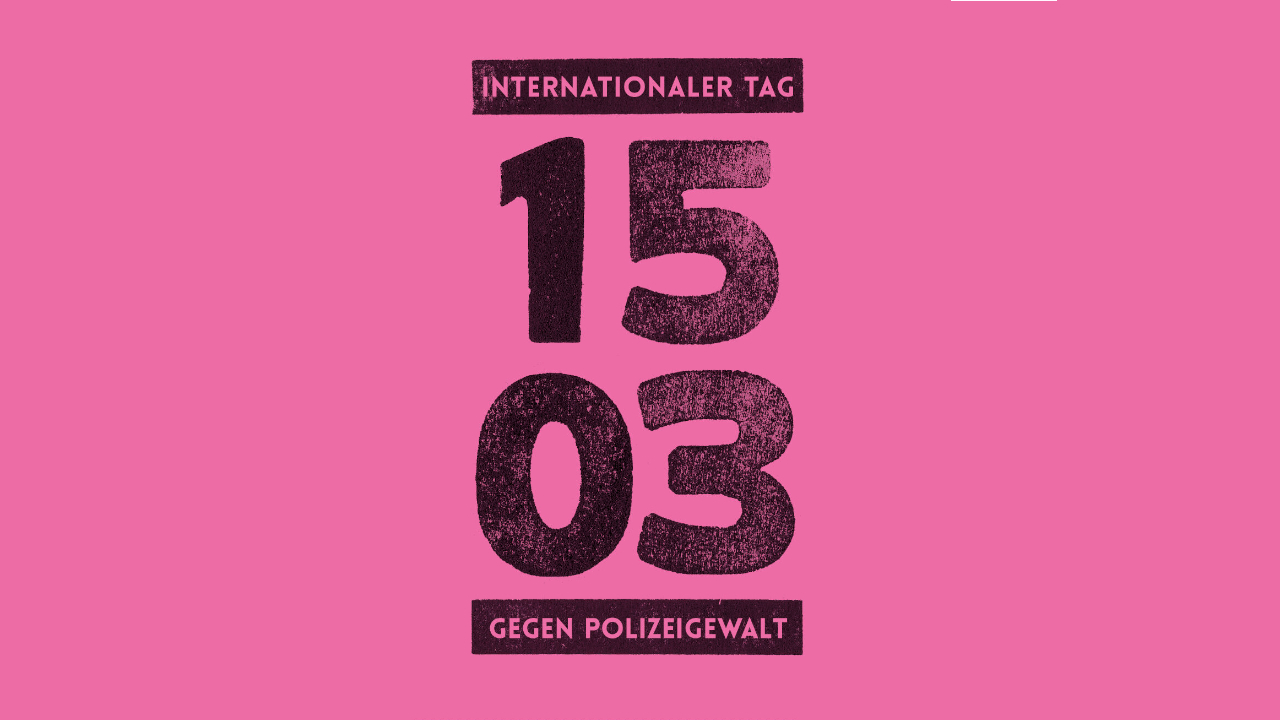 Solidarity instead of police violence!

After the murder of George Floyd in May 2020, for a short time racist police violence was a widely recognized topic in Germany as well. The protests that followed made clear that police violence is part of everyday life for many people. This can be seen in the context of deportations, racial profiling and random identity checks, police harassment of BIPoC (Black, Indigenous, People of Color), homeless people, sex workers, soccer fans, anti-fascists, environmental activists, disabled people and people in mental crisis.

Especially during the Corona pandemic, it is obvious that some groups of people are more in focus of the police than others. For example, homeless people and BIPoC receive much more fines – not because they commit more violations, but because they are controlled more often. This clearly shows that the police’s image of people is characterized by criminalization of marginalized groups.

In Germany, as elsewhere, people die as a result of police violence and/or while they are in custody or in the hands of the state. Only in 2020, among others, Maria B. and Mohamed Idrissi were murdered by police officers. Ferhat Mayouf burned to death in custody at Moabit Prison in Berlin. In the aftermath, the victims themselves are usually declared guilty, while the officers are not held accountable. More information on this topic can be found at deathincustody.noblogs.org.

Furthermore, almost no day goes by without a new right-wing chat group or other involvement of the right-wing scene and the so-called security authorities becoming public. The unwillingness to clarify these so-called “individual cases” is similar to the handling of the NSU complex, where the police investigated the victims’ families in a racist manner and categorically ruled out a right-wing background.

The existence of right-wing networks within the police is only the tip of the iceberg. The foundation is a social order built on inequality, which the police is supposed to protect as an executive force. The categorization and classification of people are also reflected in laws: residence law, property law, criminal law, etc. How could a police force of this society be any other than racist, classist, sexist and ableist? Right-wing attitudes in the police find their optimal breeding ground there.

Attitudes of inhumanity and violent behavior among police officers are downplayed and encouraged or knowingly covered up by an ongoing culture of impunity and a widespread corps spirit. Political decision-makers, public attorneys’ offices and courts protect the police and systematically prevent the issue of racism from being addressed within the police institutions.

Independent studies on police violence and racism are being blocked by politics, delayed and criticized as biased. Within the police, any criticism is vehemently resisted. This shows that the police see themselves as a closed, untouchable and above all infallible system.

Those affected find it difficult to be heard and to find support. In the German judicial system, there is practically no support for people who experience police violence. Moreover, the denial of trauma and the systematic denial of the experience of violence by the police cause lasting damage to those affected. It is rare for police officers to be charged and even rarer for them to be convicted. In addition, it is part of the everyday practice of officers, especially in cases of violent assaults on duty, to preemptively charge the persons involved in order to avoid their own criminal prosecution. This leads to an additional criminalization of people who try to defend themselves against the violence they experience.

In Hesse in 2020, there was a surge in cases of right-wing extremist perpetrators in the security authorities – be it the death threats signed “NSU 2.0”, the accessing of personal data from Hessian police computers or racist chat groups of police officers. And after the events at Frankfurt’s Opernplatz, especially migrant youth were harassed with racist police controls. We founded ourselves in 2013 with the goal of jointly confronting the normality of racial profiling with concrete support for those affected, the mobilization of people passing by to show solidarity, and political public relations work. Our work has three political focal points: the telephone hotline, the information center and the documentation of racist police checks in Frankfurt. We will never get tired of fighting against the literal windmills together with the affected persons!

At the beginning of 2020, the new Saxon Police Law came into force, thus expanding the powers of the police in Saxony as well. The Corona regulations led to an increased presence of the police on the streets. In the course of this, controls increased. This was particularly felt by people who were pushed to the edge of society. Resistance to these measures arose. Several demonstrations of the Black Lives Matter movement and rallies against police violence took place. There is no real control of the police and their actions. That is why we founded the Cooperation Against Police Violence (KGP) in spring 2020. We are building an independent complaints office and a supportive network for those affected by police violence in Dresden.

For the past eight years, KOP Bremen has been working continuously on the issues of police violence, racial profiling and institutional racism. In numerous events and workshops, KOP has provided information about these topics and informed potentially affected persons as well as witnesses about possible ways to act. For several years, KOP Bremen has been working to make March 15 more meaningful. In Bremen there is a sad continuity of deadly police violence. For example, Laya-Alama Condé died in 2005 as a result of the forced application of vomitory drugs, a torture practice frequently used by the police and the Evidence Service until then. In 2020, Mohamed Idrissi was shot by police after he tried to flee a pepper spray attack by an officer – the police were on the scene without the social psychiatric service, despite knowing about Mohamed’s mental illness. As a result, the JusticeforMohamed alliance was formed, in which Mohamed’s relatives join with other groups to fight for clarification and justice.

Since April 2018, Copwatch Hamburg has been organizing solidarity actions around the Balduintreppe for an abolition of the so-called ‘dangerous places’ in the neighborhoods of St. Pauli, St. Georg and the Sternschanze, as well as against racist and otherwise discriminatory police controls. Since then, we have been supporting those affected by racist criminalization, observing and documenting police measures and making them public. The fact that Hamburg has a massive police problem became clear once again in 2020: for example, the expanded police powers in the context of containing the Corona pandemic led to an increase in discriminatory police controls and assaults, especially in the so-called ‘dangerous places’. We will not leave alone those affected by this and continue to rely on practical solidarity and resistance!

KOP Kiel supports, since 2017, people affected by racist controls and racist police violence. With workshops, events and information tables, KOP Kiel raises awareness on these issues and develops possibilities for how to act. With a legal aid fund, affected people are supported financially. Particularly in the spring and summer of 2020, amidst the contact restrictions in place, there was an increase in the observation of racist controls in parks, on the Kiellinie and at the Germaniahafen. The special situation at the harbor is the reason why customs officers also suspect people and carry out racist controls. At the end of February 2021, the new police law for Schleswig-Holstein was passed, with far-reaching powers for the police officers. We remain vigilant and show solidarity with affected people.

We, CopWatch Leipzig, founded ourselves two years ago on the occasion of the introduction of a weapons ban zone in Leipzig. We are a group of activists who critically deal with police and topics like racial profiling, authoritarian development, militarization or the restriction of basic rights. We see these issues in a context that is critical of capitalism and try to confront this with a concept of social security and perspectives based on transformative justice. Likewise, we try to offer a point of contact and advice for those affected and to open up room for action for them. We document controls, accompany subsequent processes if necessary, address the problem of racist police practice in public, and thus also try to exert pressure on the relevant authorities. In addition, we try to contribute to the empowerment and support of those affected by texts, posters, flyers and workshops.  Saxony has a police problem, which is nothing new – this makes it even more important to create structures of solidarity and at the same time to build up pressure on the police and to link this with a radical critique of the repressive policies and the excluding system behind them.

We want to confront the problem of police violence!

In short-term we demand:

In long term we demand:

Until these demands are met, we urge you to: